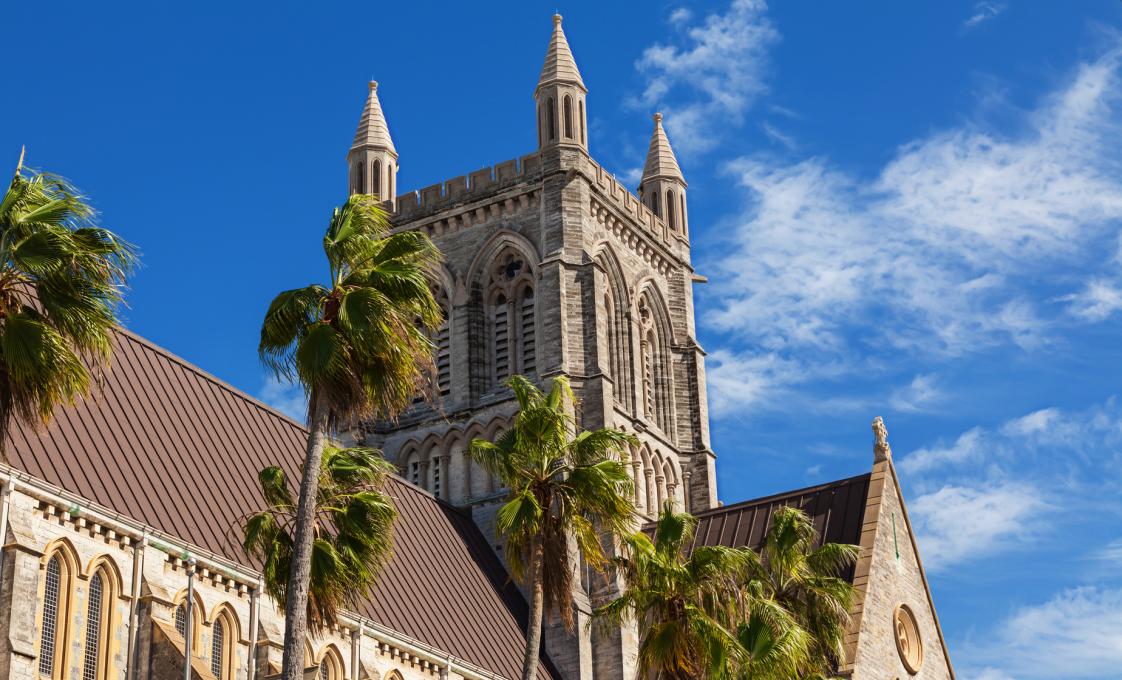 Where other tours only show you part of the island, this comprehensive tour provides a quick but fascinating look at all of Bermuda from Dock Yard to St Georges.

See the Best of Bermuda on this Bermuda Island Tour that takes it all in.

Departing from Bermuda's Royal Navy Base at Ireland Island ( Kings Wharf), you will have a brief orientation on the history, purpose and some of the buildings of the arsenal and fortress that date back to the 1700s. As you drive through the picturesque parish of Somerset on this King's Wharf shore excursion, you'll see the island firsthand. You'll cross the smallest drawbridge over the Atlantic Ocean - the Somerset Bridge and its 18-inch opening. The bridge dates back to the 17th century and links Somerset with the main island of Bermuda.

Traveling to the south shore in the Parish of Southampton, you will make a short photo stop of the Gibbs Lighthouse. Built in the mid-1840s, this 117-foot-tall lighthouse offers pastel views over the south shore as well as the Great Sound (there will not be time to climb the lighthouse). Driving along the South Shore, look down on some of Bermuda's famous pink sand beaches, including Horseshoe Bay and Warwick Long Bay.

Along the way, you'll pass the botanical gardens. Originally opened in 1898, the Bermuda Botanical Gardens features 36 acres of trees, flowers and shrubs. The gardens are also home to the Camden, the official residence of Bermuda's Premier, and the Masterworks Museum of Bermuda Art, where every piece has some link to Bermuda.

You will then drive through a portion of Tucker's Town. This exclusive enclave for wealthy tourists includes a golf course and the Mid Ocean Club Hotel. Home owners over the years have included Abby Rockefeller and Childs Frick, as well as presidential candidate Ross Perot and New York City Mayor Michael Bloomberg. Unfortunately, due to high hedges and gates, few of the houses can be seen.

You will then drive to the UNESCO World Heritage site of St. George which, due to a shipwreck in 1609, became the first settlement on the island and was therefore a major part of Bermuda's history. During a brief driving orientation, you will pass by St. Peter's Church, which is believed to be the oldest continually used Anglican church in the Western Hemisphere (1612). You will then have a short time to wander the narrow streets on your own. On this Bermuda Island tour, you may also have the chance to catch part of the performance of the Town Crier's dunking of the malicious gossip. Departing St. George, you will drive to Hamilton via the North Coast Road.

Hamilton is the capital of Bermuda and is located on the protected shores of Hamilton Harbor. Although not the oldest town on the island, it was made the capital in 1815. As you drive through the city you will see the Hamilton Cathedral (1897), the city hall, and views of the Italianate Government House (the Governor's residence), that sits on nearby Langton Hill. Your Bermuda excursion ends at the Ferry Terminal in Hamilton.

From here you can explore the town at your leisure or catch the ferry to Dockyard (King's Wharf). Ferries run almost every hour and the trip takes approximately 20 minutes. A ferry ticket is included in the tour price. As this tour ends in Hamilton, it is the guests' responsibility to be back to their ship in Kings Wharf at the appointed "All Aboard'' time.

We are experts in providing exceptional shore excursions. We understand that in today's fast paced world, vacations have become an increasingly important way to relax, reconnect with family and friends, and experience new and interesting places. With this in mind, we provide the highest quality tours by performing extensive research, and detailed reviews. While other companies also offer excursions, we strongly believe our expertise and approach set us apart. The large cruise lines sell shore excursions - typically in very large groups visiting high traffic sites. We focus on smaller groups visiting more interesting and authentic locations using more personalized local operators. While the cruise lines are experts in delivering cruises, we are experts in delivering shore excursions.

Our Approach
We believe quality service is not only highly valued by customers, but ultimately leads to better experiences and higher satisfaction. Unlike the cruise lines and other tour companies that rely almost entirely on websites, we encourage customers to call us. We want to invest our time answering your questions, providing input, and selecting the excursions that best meet your needs.

Our Tours
Our goal is to provide customers a wide array of exciting, appealing, and enriching tours. For those customers who prefer to travel in smaller groups with more personalized service, we offer a wide variety of small group tours around the world. These tours generally range in size from 2-12 people compared to larger tours which can number up to 50 people. While exploring the destinations and ports on this website, feel free to search for these "Small Group Tours". For those customers interested in private tours, we offer many outstanding excursions that allow you to travel with your party alone and, in many cases, to fully customize your tour. Search for "Private Tours" if you are interested in this experience. Our "Scenic" tours provide up close and personal access to some of the most spectacular natural environments on Earth from majestic glaciers in Alaska to spectacular reefs in the Caribbean. Our "Cultural" tours allow customers to experience local customs, entertainment and culinary delights ranging from tribal dances in Alaska to an outstanding local meal in Santorini, Greece. Our "Active" tours offer a multitude of exciting and adventurous ways to experience our destinations. Our customers can kayak the turquoise waters of the Caribbean, hike to a spectacular waterfall in Hawaii, or bicycle through quaint villages in France. Our "City" tours allow travelers to see the highlights of great cities around the world with unique insights provided by our expert tour guides.

Our People
In our experience, exceptional travel experiences are almost always delivered by exceptional people. With that in mind, we utilize a comprehensive approach to select and employ the leading tour guides and tour providers around the globe. We hold our people to very high standards which we measure by our comprehensive Quality Control process and, most importantly, by our customer feedback, which we will actively seek from each of our customers.

Our Owners
Shore Excursions Group is owned by seasoned travel executives possessing extensive experience across many sectors within the travel industry.

Michael Bonner
Mr. Bonner has over a decade of experience working in the cruise industry in a variety of roles for both Royal Caribbean Cruises Ltd. and Viking River Cruises. Most recently, Mr. Bonner was the Chief Operating Officer for The Scholar Ship, a Royal Caribbean program aimed at providing college students onboard educational programs in conjunction with enriching shore excursions around the world. Mr. Bonner also helped co-manage Viking River Cruises U.S. Operations, and he ran the corporate, strategic, and deployment planning functions at Royal Caribbean. While at Royal Caribbean, Mr. Bonner was responsible for forming Royal Celebrity Tours, Royal Caribbean's land-based tour operation in Alaska, which takes cruise passengers on multiple day tours through the interior of Alaska either before or after their cruises. Prior to working at Royal Caribbean, Mr. Bonner was a consultant for Booz Allen & Hamilton.
Less
from $99.00 (USD)
Per Person
Contact Us
Tour Type
Group
Group Size
Standard
Activity Type(s)
Scenic, Cultural
Tour Duration
5 Hours
Activity Level
Moderate
Tour Leaves From
An approximately 10 minute walk is required to reach your departure location.
Food/Beverage Provided
None
Special Instructions
We recommend wearing comfortable clothing and sensible walking shoes. Sun glasses and sunscreen
Restrictions
Guests need to be able to walk over packed dirt, grass, gravel and/or pavement at the various sites. Transportation is not wheelchair/scooter accessible.
Terms & Disclaimers